These wildlife photography tips will help you take better animal pictures on your safari.

I have over 40 years of African wildlife photography experience and these are a few of the things I have picked up over the years that have helped me improve my images.

This is one of those wildlife photography tips that is particularly handy on a safari because often there is vegetation in the image that is distracting and blurring it gives more emphasis to the wildlife subject, such as with the ostrich photo below. 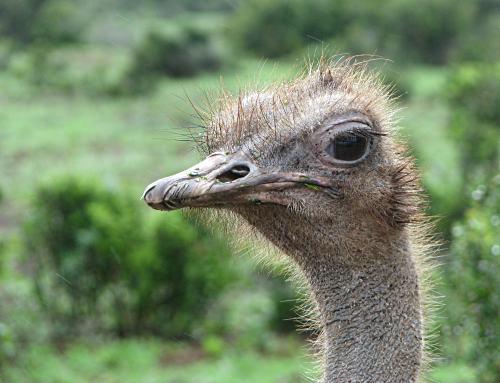 And then on the other hand if you are photographing a herd of elephant you might want to make sure that they are all in focus so you will try and limit the blurring present in the scene.

The fancy name to describe the portion of the scene that appears sharp throughout the whole image is depth of field. But more important then knowing what it's called is knowing how to control it. Three factors affect depth of field: the aperture, the focal length of the lens, and the camera to subject distance.

Of these three, the aperture is the one that you have the most control over on a safari. A big aperture opening (e.g f/4.5) will lead to more background blurring while a small aperture (e.g f/22) will lead to the overall scene being sharper.

I remember which is which by matching up the similar first letters, so Big = Blurred and Small = Sharp. That tends to limit the confusion to a minimum. Make sure you know how to change the aperture opening on your gear before you go on safari.

More wildlife photography advice and information on this website that will help you take the best animal pictures possible on safari...